ECHOES OF THE DREAMTIME 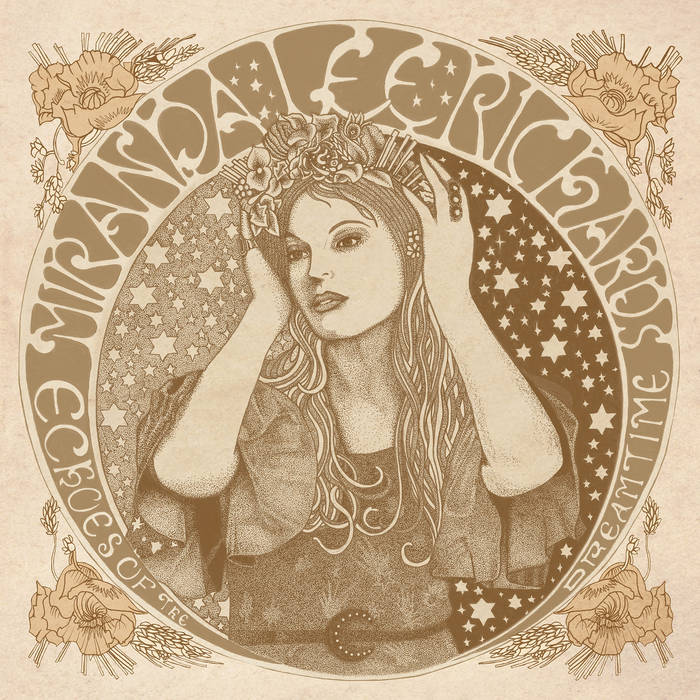 bruceb This album is strong, original, and beautifully written and performed. Favorite track: Colours So Fine.

Miranda Lee Richards is a gifted Los Angeles-based singer songwriter. Born in San Francisco after the summer of love and before the dawn of disco, she grew up in an artistic and bohemian environment that has informed her adult life and work. Her parents are well-known underground comic book artists Ted Richards (Forty Year Old Hippy and Dopin' Dan) and Terre Richards (Suzi Skates and Wimmen's Comix) -- R. Crumb is their most famous contemporary.

After graduating from the San Francisco School Of The Arts, she travelled to Paris to do some modeling, but soon returned to the U.S. to pursue a musical career. A series of chance encounters with influential people began when she became friends with Kirk Hammet from Metallica who taught her to play guitar. Early demos of her songs reached the ears of Anton Newcombe, and she soon joined his band, The Brian Jonestown Massacre. She sang on their early albums Give It Back, Bringing It all Back Home Again, and Stung Out In Heaven, and appeared with them in the seminal documentary DIG!.

In 2001, Virgin Records released her full-length debut album, the Herethereafter. The album was a mix of folk, psychedelia, country and indie pop, and found fans worldwide, especially in Japan where the single “The Long Goodbye” reached the top five.

Her critically-acclaimed sophomore album, Light of X, the title of which came from a dream about harnessing beams of light to travel in time, followed in 2009 via Nettwerk Records. The music was a progression from the template laid out on her debut album, anticipating the symphonic pop music that came later with the likes of Anna Calvi and Agnes Obel.

Richards’ latest album, Echoes Of The Dreamtime, was recorded at her home studio with husband and producer, Rick Parker (best known for his work with Black Rebel Motorcycle Club and Lord Huron). It brings together eight pastoral, atmospheric epics into a work that is her most impressive yet. Echoes of the Dreamtime incorporates a more lyrically narrative style, with many of the songs coming in at over five minutes in length, with four and five verses a-piece. One song, the eight-minute track ,"It Was Given," (based on the movie The White Ribbon by Michael Haneke), is an example of an adaptation put to song.

As Richards states, “So much of our experience lies within the realm of the subconscious, influencing our outer realities. When we begin to realize we have control over our offering to the world, we begin to examine the subconscious and have a conversation with it, instead of being ruled unknowingly by it. Contained therein are themes of self-discovery, transformation, and grappling with the duality between dark and light within our selves and society. The literal use of Space Echo throughout the album is reflective of the theme: it’s subtle and beautiful and repeats until we listen.”

Try to make this a habit
Moving slower than the rabbit
How will you ever
Make it there?

(OUTRO)
But you found a new way…
You found a new way home
Track Name: Colours So Fine
See yourself as a child bathed in golden light
A vision of the heart in your mind’s eye
The elusive mysteries of this life
They are calling as you step inside…

As we open new dimensions
We are gaining new perspectives…

There’s a hunger, that’s deep inside
It’s not polite; it won’t apologize
It’s a wild beast that has its grip
And it won’t let go; make peace with it

When the storm arrives, it’s gotta’ crazy eye
It has no mercy until it dies
Now I’m headin’ north to Baton Rouge
Where the ground is dry, and the sky is blue

And the levy’s holding fast, they said it would last they promised
Descending in your diving bell beneath the swell looking for solace
But you had been down too long, you knew it was wrong but you felt helpless
As the pressure starts to rise, it’s a matter of time, you arrive…
At the bottom

Feelin’ bad, feelin’ better
Gonna’ stop, write a letter
To the government, the powers that be
I’ve been fightin’ wars, in the name of peace

Descending in your diving bell, beneath the swell looking for solace
You had been down so long, the pressure was strong, ‘til you release it
As your spirits start to rise make your way toward the light at the surface
Now your comin’ up for air the coast is clear
You would survive this; now you’re lawless; now you’re fearless
Track Name: Tokyo's Dancing
Tokyo’s all lit up and she is dancing
Always romancing more blood from the stone
On a bed of roses you were sleeping
Their thorns slowly creeping
And that’s a pain you had learned to bare

You had been searching for fossils in the canyons
The caves’ companion to the boys playing in the sun
Before the beast comes it gives me fair warning
It announced it was coming, but I chose not to run

Here is a life that is shaped by choices
Guided by voices and rules of thumb
On the steps of the church stood a statue of St. Francis
Back to your birthplace where the sister birds sing

Shouting from the rooftops I see smoke and amber
Those coal porter chambers telling tales of another life
Sometimes I think of the mothers of soldiers no matter who our leader is
Must we fight for gold or God?

We go back and forth
We go ‘round and ‘round I see the Earth moving slowly as she turns
Don’t let the child lead; they’ll shake the fruit from the tree
And all you will hear is their laughter
Wonderin’ what’s in store for our future
Track Name: Julian
Take what I say for what it is worth
That is why we have words

Julian, what don’t you understand?
From this room you are banned

Ribbons of purpose, they intertwine
What is yours not yours
Mine not mine

Would you look to the sun?
Could it have risen without God?
Will you humble yourself in the presence of this phenomena?

I see you as a child who has needs
It’s so easy to forgive you
But it’s always me, me, me

What is the cost?
What is the price I pay?
When I don’t want it anyway
Track Name: It Was Given
She grew up in a nice big house
The walls were thick you could run about
It was given

White birds flew threw the thunderstorm
She was taught to fear nothing, and given a ribbon
To tie in her hair

War began brewing in the countryside
Paranoia it spread, it was man’s poison
As they passed the cup

When Lady Peace finally answered her call
The horror subsided, and the cloud of fear was lifted
No one ever convicted

Time, the great healer, softened the ground
History righted itself through future generations
The legacy forgotten

She said I hear the clock ticking twice
Transforming shards of darkness into light
The murals in the street showing scenes from their lives
Grateful for being born in another time
Track Name: Already Fine
Like a coin of the purest gold
You were already fine,
You were already fine

Love is like a shelter
That finds you in the night
There’s a light on in the attic
Won’t you come inside?

Bandcamp Daily  your guide to the world of Bandcamp