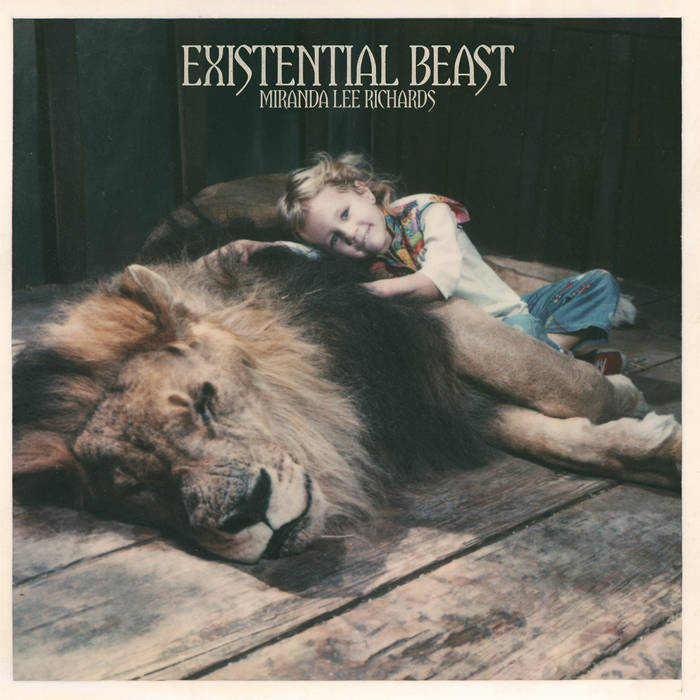 EXISTENTIAL BEAST is a political album, examining the issues of our time, but with the intent of tackling these tough and often taboo subjects in a poetic and heartfelt manner. The title is also a mash-up of terms, referencing the existential crisis that has in turn arisen.

MIRANDA says of EXISTENTIAL BEAST, “In essence, we are all still working within those animal urges of fear, competition, survival and sexuality which are deep-seated and manifesting in varying ways and degrees for different individuals, depending on where they are at. But like it or not, these tendencies have been revealed, within our leaders, our countries and ourselves; it is indeed a pivotal and transformational time and there is much work to be done.”

Born in San Francisco after the summer of love and before the dawn of disco, MIRANDA LEE RICHARDS grew up in an artistic and bohemian environment that has informed her adult life and work. After graduating from San Francisco School Of The Arts, she began to pursue a musical career. She met Kirk Hammett from Metallica who taught her to play Mazzy Star songs on guitar. Her early demos reached Anton Newcombe and she joined his band, the Brian Jonestown Massacre. MIRANDA then signed to Virgin Records and released her debut album "The Herethereafter," a mix of folk, psychedelia, country and indie pop, and found fans worldwide. The critically acclaimed follow-up album "Light Of X"–the title of which comes from a dream about harnessing beams of light to travel in time–followed in 2009 via Nettwerk Records. In 2016, MIRANDA unveiled "Echoes Of The Dreamtime" on Invisible Hands Music, which received rave reviews across in the U.K. and U.S., as well as national airplay with Mojo giving the album 4 stars and hailing the first single, “The sublime ‘First Light Of Winter’ is the moment it all comes together, Richards transcending her influences and, no longer constrained, arriving at psychedelia’s higher plane” (1/2016). EXISTENTIAL BEAST is yet another confident and inspiring piece of work from MIRANDA, sure to excite her ever growing fan base.

Track Name: Ashes And Seeds
Oh, Mother it bothers me
This march with complacency
Oh, Father, have you heard about it all?

I didn’t make these problems
But by them I’m burdened
We inherit the Earth with what contingency?

Will it make me feel better?
To sign angry letters
Endless causes arising from the spring

If I want to help start with myself
Some subjects I should never dwell
How do I keep from falling in the well?

What about non-violence
Is that still in fashion?
Is awareness the magic bullet that we seek?

Human beings have always been afraid Of the end of the world; that they need to be saved
Some things will never ever change

While history repeats and repeats
In the matrix that has come to be
And the flowers grow from the ashes and the seeds
That were planted long before you or me
Track Name: The Wildwood
The arrow pierced the heart of the lion
The world proclaimed its wrath
Shaming the one whose nation
Celebrates his catch

And we come upon the Wildwood
Justice will be served
Sometimes I don’t know why these whistles I blow
Are they ever heard?

Oh, it’s the Wildwood
Oh, a place of fear
Oh, it’s a dark world
Until you forgive my dear

And we come upon the Wildwood
Awaiting Judgment Day
Sometimes I don’t know why these whistles I blow
Can the world be saved?

But you were living in the void
Feeling low
Yes you

But you
Were living in the void
Feeling low
Yes you

Who dare disturb the beast?
Warriors of the Golden Army
Setting intentions in their bows
Piercing the heart of the unknown
Staking claim upon higher ground
Roses of victory in your crown

In all that ever was
In all that’s ever been
An unveiling of eternity
Accountability and honor
The polarization of words
Intuition versus experience
The randomness of perfection
Beyond the fear of the unknown
Your presents within your presence
Your will and the highest will manifest
Spanning the bridges of time and space
That visceral sense of wonder and magic
Summoning the spirit and all that it means
To find joy and fascination in what you are creating
You are free, and you have always been free to choose again
Is there such thing as integration of heart and mind, conscious and subconscious?
Do you view right and wrong in terms of absolutes?
Why does the voice of the heart reign supreme?
Have you learned to love unconditionally?
Do you let your higher self be your guide?
Are you able to give AND receive?
Do you embrace the unexpected?
Is morality subjective or sacred?
Why do you want those things?
Where does darkness reside?
What is your true desire?
What are you creating?
Why are you here?
OM
OM
BREAK FREE!
Track Name: Back To The Source
I beg of you to go
Back to the light
Back to the Source
Back to the storm from where you came
Healing light, oh bright white

Oh, it was fleeting
I begged you to stay
Please, don't go until I say
It's time to be on your way

Oh, weary wanderer
Where is it that you belong?
Make your bed in the willows
And sleep to the small bird's song

Oh, it was fleeting
I begged you to stay
Please, don't go until I say
It's time to be on your way

Oh, they were fleeting
I begged you to stay
Please, don't go until I say
It's time to be on your way
Track Name: Existential Beast
I went dancing in those rivers of fire
Galvanized by pure desire
Believing in the Clarion Call
That fueled it all

For all we have lived who have we become?
Marching to the sound of the same old drum
Until the change would fall upon us
Ready or not
Track Name: Oh Raven
Oh Raven, oh raven, why must you arrive?
I was painting in color
I was minding my own mind
Circling above me bearer of warning song
You have been here long enough
You have been here too long

I could take it as danger, I could see it as fate
When things they are changing to more of the same
But the raven it chooses for whom it awaits
And I realize now, it's a choice that I make

And all I hear is their silence
I got no clarity at all
And now my dreams are haunted will someone
Wake me from this fall?

Well you know, it’s alright, you will learn by and by
Not to throw your caution to the wind
Follow the voice that speaks in the night
What else do you have to go by?

I got time but no money
I got money no time
Why is gotta’ be either or
While I wait for the man to decide?

Oooh, but there’s somethin’ about this, yeah
I can’t let go
A lesson in this, yeah,
Let the arrow go

(CHORUS)
Track Name: Another World
I’m afraid of my shadow
Radioactive oceans
And rainbows that swirl in the tide
But I’m not afraid to speak of the darkness
For it must be brought to light

Well, I see Another World
Where we eat flowers for dinner
And we drink the water from the spring
California don’t throw yourself to the sea
You were never unwanted

Robber barons and plunderers
Who take no prisoners
The jest is now upon us
We bow our heads; by fools we are led
Apathy’s consequence

Well, I see Another World
Where we invite the enemy for dinner
And we learn to draw new boundaries
Exploring new territories
California don’t throw yourself to the sea
You were part of a bigger picture

Well, I see another world
Where we would march together
Our voices ringing in the street
The Stars and Stripes of unity
California don’t throw yourself to the sea
For the ballot was cast in your favor

Now the cats silence songbirds
Pigs eat the last curd
As we tend our creatures with hooves
And who will become beasts of the wood
Where, oh where, are the last of the wolves?

Well, I see Another World
Where only animals kill one another
And we drink the water from the spring
Forgiving ourselves and our history
Guilt is but a poor man’s apology
And you were never forgotten

Well, I see Another World
Where we eat flowers for dinner
And we drink the water from the spring
Elevating our hearts and our bodies
California don’t throw yourself to the sea
You were never unwanted

Bandcamp Daily  your guide to the world of Bandcamp